Topmics, along with some of our Top Tier Artists, drove from New York to NC in the Topmics Tour Van. "Trife Boss," Topmics Top Approved Artist from T.H.C Productions and "Cali Macc," Diamond Life Recording Artist, joined us on the road. Also present was "Ben Heard," Diamond life CEO/ Manager to YMCMB Artist "Hollywood". 8 hours of driving felt like only 3, cause we had our own party inside the Topmics Tour Van!

Shout out to Fortune Empire and Rick and April Huger for bringing Topmics to Raleigh North Carolina. The venue was amazing and we can't wait to do another show there. This is what we do… Tour state-to-state exposing top raw independent talent across America.


The next stop was Harlem, New York on Nov. 5th. As you know by now, Hurricane Sandy passed through New York and the surrounding areas and left a mess all throughout. But we stuck it out, the show finally happened, and it was a success! Sandy could not stop Topmics from its primary mission: "To Expose The Raw Independent Talent" State-To-State Across America. Pictures from each event are already published all over the Net. Let us fill you in on some the artists who came out to support music in Harlem. There were two RnB acts, C Jones and Mike V - they both laid it out for Topmics fans, Wooo! They had the girls and the guys in awe. Cali Macc performed Topmics’ favorite track "Bomb Bitch" - Man we love his music! Kaze had a live band - acoustic guitar was his weapon of choice and the sound was awesome! Mike Moët is also a phenomenal artist from the Bronx- dudes a star. Shout out to Uncle Swizzle, one of New York's Top Managers who understands the art of hand picking the best talent in NYC. Big P came through again for Topmics, bless you bro.

What State is next you say? New York December 2nd, Virginia Beach Dec 9th for 2012. 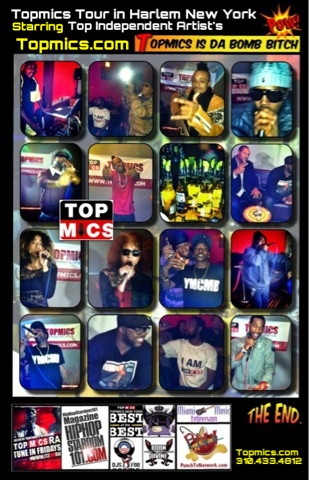